Artist Anton Alvarez on his next big chapter

on his next big chapter 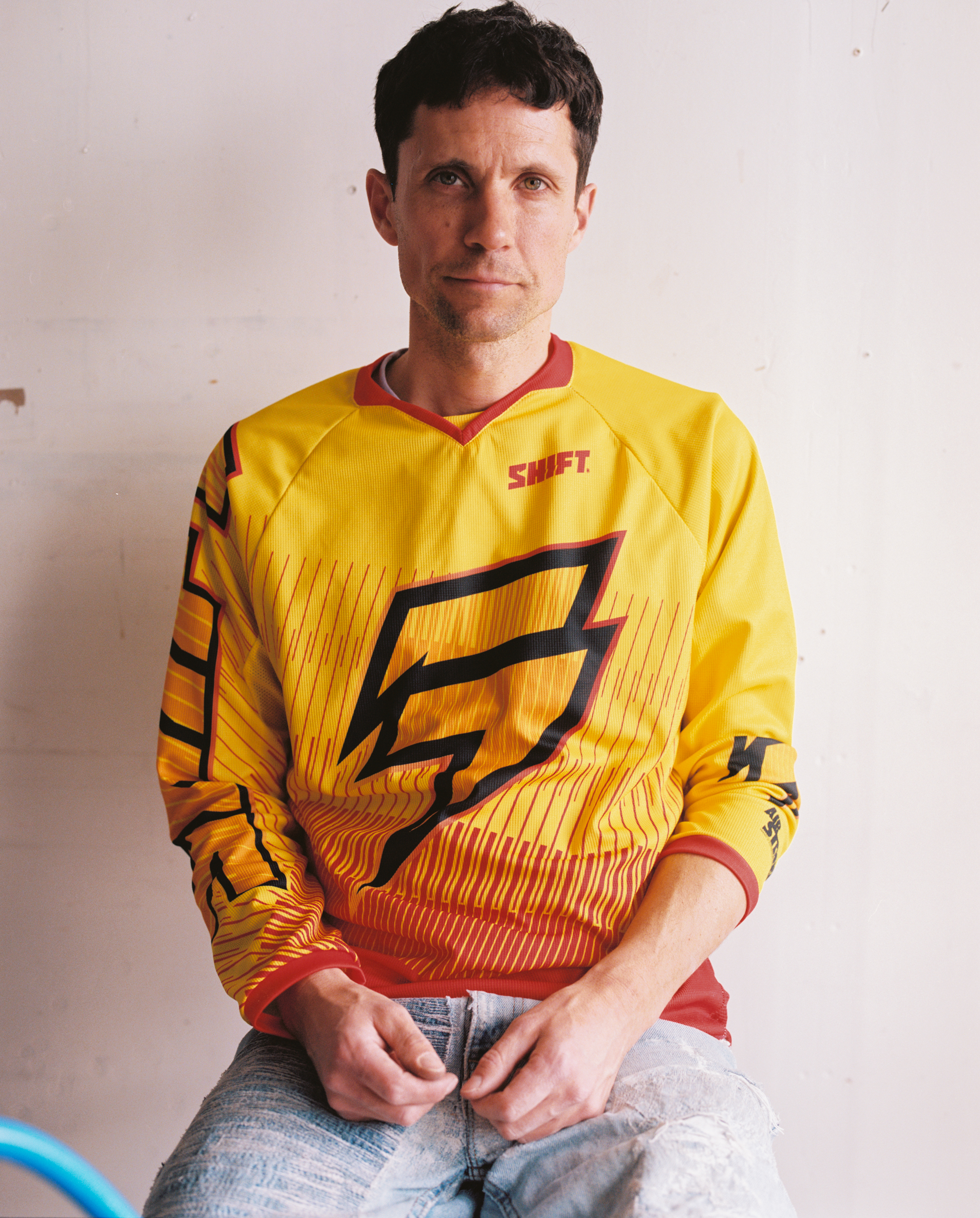 Anton Alvarez constantly questions the role of the artist; ideally, he’d like to remove himself completely from the pieces he creates. Since graduating from Royal College of Art in 2012 he has exhibited in cities such as London, Milan and Basel, as well as Stockholm. Now he is working on two major exhibitions, in London and at Vandalorum in Värnamo, Sweden, scheduled for June 2021.

A.A              I want to develop a new kind of machine with the help of factory owners and companies with an interest in art. Värnamo is an area with plenty of industry and furniture manufacturers and I'd like to create a collaboration using their resources to make something together.

Anton Alvarez has been dubbed ”engineer” for his technical skills. His machine The Extruder uses an electric motor to exert more than three tons of pressure on wet clay, pushing it through different moulds and shapes. The result are unique and beautiful sculptures.

Anton Alvarez' studio is based in the south of Stockholm. His shelves are filled with new and old sculptures.

A.A              It'll be nice to let the process decide what it's going to be. I'll start with a clean slate, then I'll press the button to see what will emerge and I'll learn from that. By creating a new tool and rediscovering technology in a different context, it might be possible to create something completely unique that's never been seen before.

A.A              I didn’t have a clue, which is how I like to think about my work. I don’t really know what I’m doing, it’s something that grows gradually. I applied to a course and didn’t know anything about the art world. I didn’t even know about Konstfack in Stockholm or Royal College of Art in London … That’s something I found out on along the way. What I was going to become was unclear, and it’s still unclear to me. It’s something that’s in a constant state of change. If you talk to me in five years time I might have gone down a different path. I want to keep it open. To avoid being too single-minded. Searching is much more exciting. 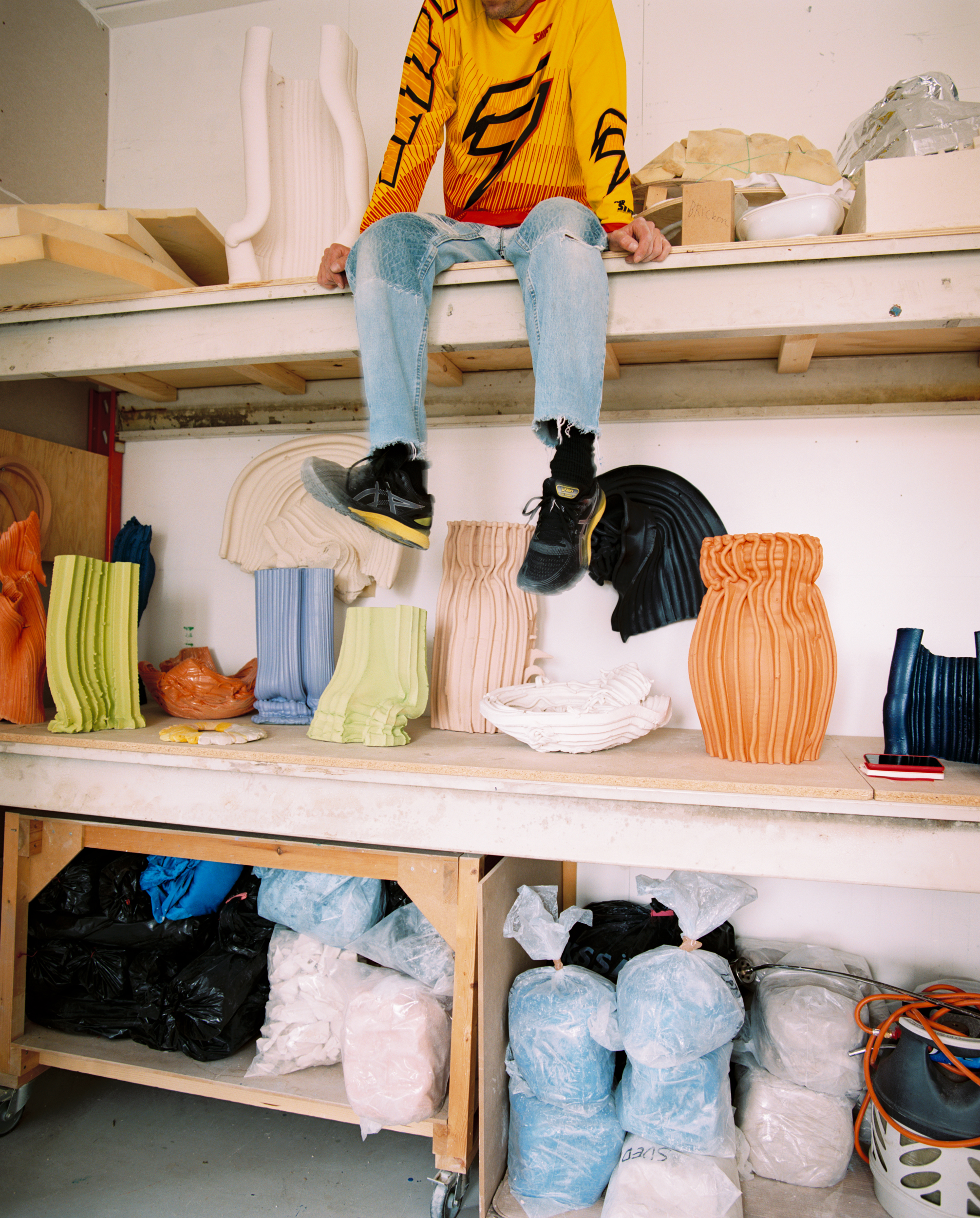 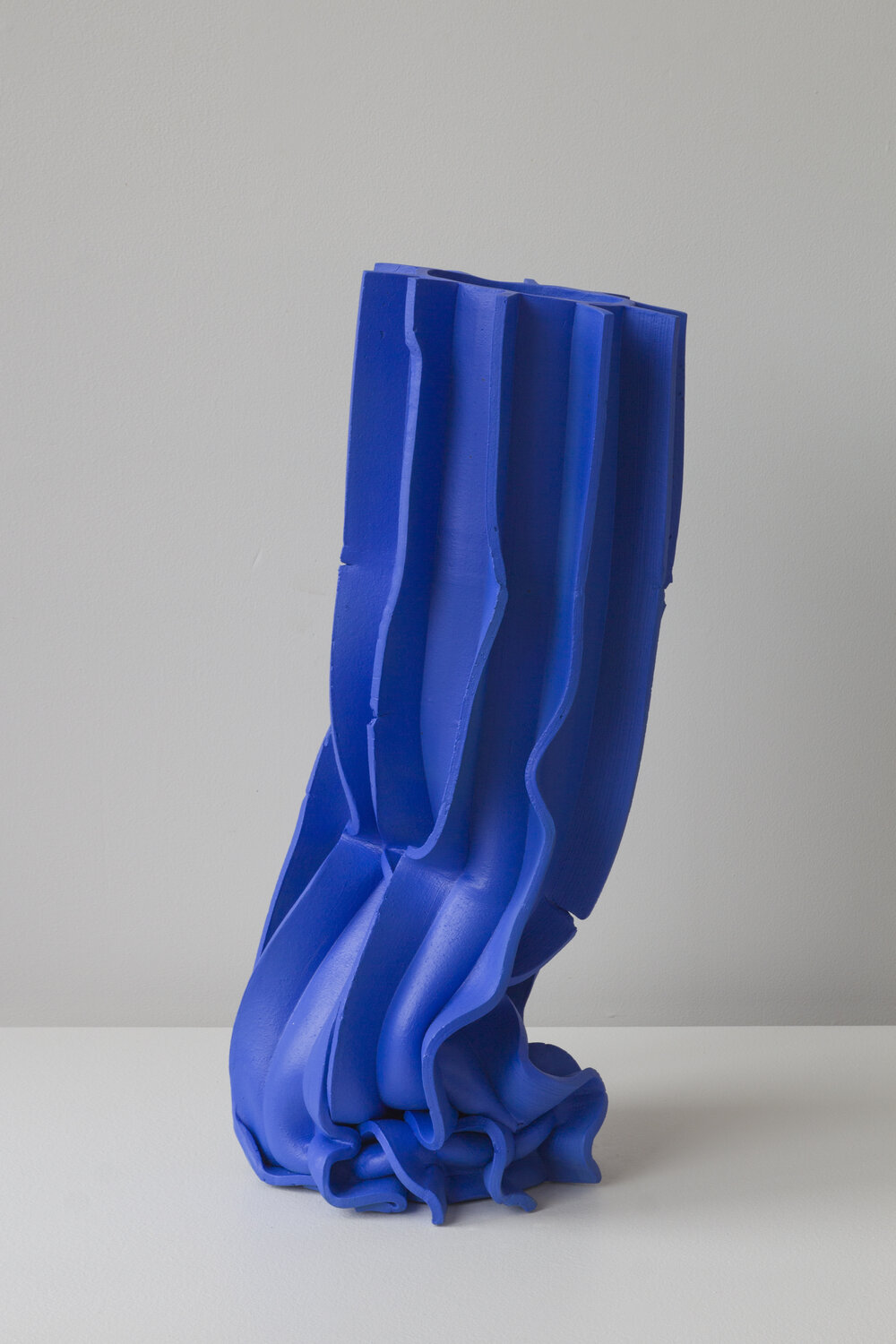 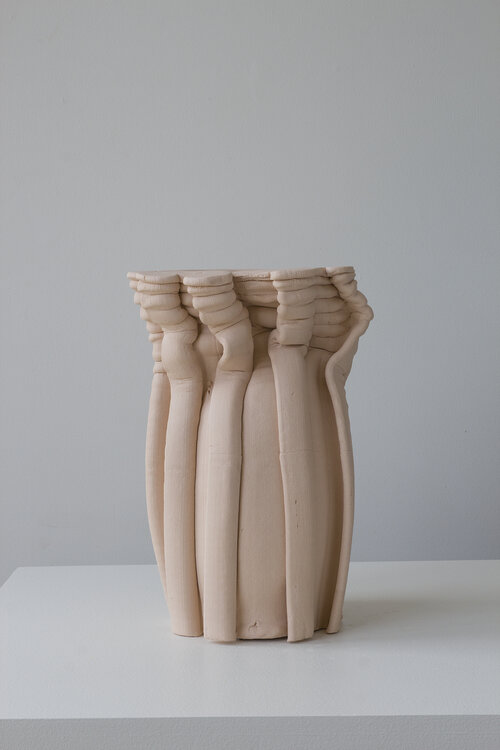 Anton Alvarez always lets the process decide what the end result will be. His machines become like an extension of himself.

”I'll start with a clean slate, then I'll press the button to see what will emerge and I'll learn from that. ”

A.A              I have a great studio in Stockholm with a shared workshop and kitchen. It's good to be in a context, but I also dream about building my own studio one day. I imagine a townhouse with two studios, shared with a friend. On the other hand I have also thought about skipping having a studio altogether and bring the machine to the exhibition space. But I need a place to prepare. It's hard to be so strictly conceptual.

A.A              I am constantly active, and I always try to create something, even when I feel stuck. To me it’s important to to have accomplished something when I leave the studio, even if I don’t believe in it. It can lead me somewhere else. It’s rewarding to see something you’ve built instead of focusing on getting stuck for a whole week. When it works it feels as if the artwork has created itself. Like nature. There isn’t a creator, it’s like it just came into existence. It’s like walking along the beach looking for pretty stones and suddenly you find one and you can’t explain how or why it’s so beautiful. It’s like that in my studio – I’m looking for the perfect result. Sometimes I have a direct influence by using certain parameters but what I’m looking for is complete autonomy in the process. 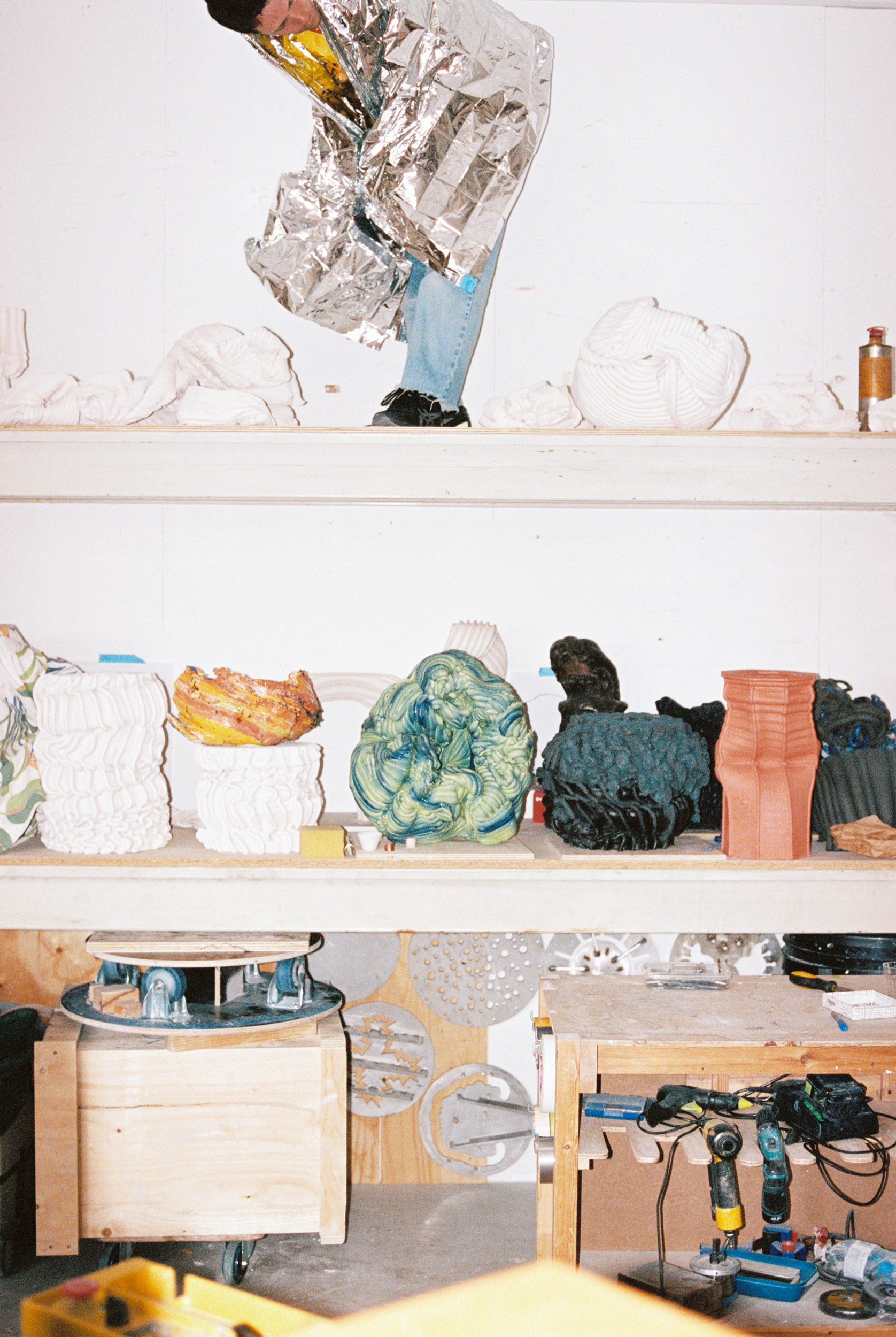 TNE           Tell us about the materials you have used. They’re often simple but at the same time you create complex constructions.

A.A              In my last project, textiles and thread was central. Now it’s wax and clay. It’s simple. I like when you can see what my pieces contain and that it doesn’t become too advanced. As an observer you should be able to rewind the time when you look at a piece, and understand how it’s made. There should obviously be a touch of magic involved as well, something you don’t understand and can think about. I also want materials that are easy to get hold of – and they shouldn’t be health hazardous, I think that’s fair enough.

A.A              I've been thinking about art swapping for quite a while as I can't quite afford to buy art. At the moment, with the pandemic, we all have more time. It's become more concrete and we've been swapping things. The art is from friends I like – and it's fun to have their work leave an impression in our home. It's a mix of artists I met during my art residency in Montana and artists from Sweden: En Iwamura, Ling Chun, Yoonjee Kwak, Hanna Hansdotter and Jenny Nordberg are some of them.

TNE              Do you have an art experience you remember particularly vividly?

A.A              I had a short meeting with American artist Sheila Hicks at a group exhibition in Basel in 2014. She works a lot with textile fibres where she's wrapped various objects with thread. When I started using that technique I didn't know about her. When I was in Chile in January 2020, I visited Museo Chileno de Arte Precolombino. Hicks lived in and travelled around Chile for 60 years. Her art practice is focused on the period when the native population lived there. It was amazing seeing the exhibition with mixed pieces from that time, images and films from travels, photos of people, historical artifacts and contemporary stuff. This is where it all began for her. Our super short meeting at the art fair in Basel was just a parenthesis but it was great to connect with her work. 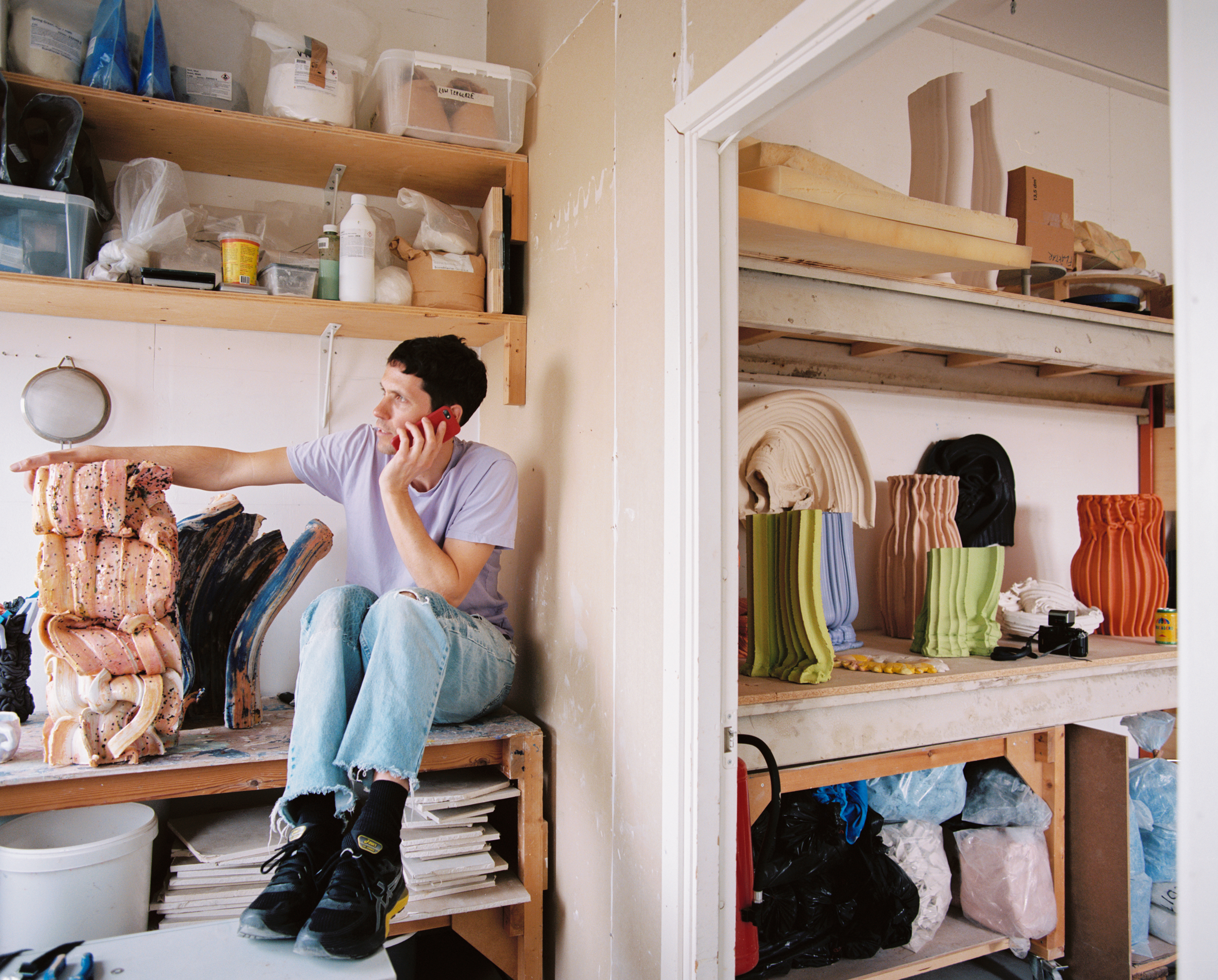